Hurricane Hostilities explores a new rendering of classic tug of war game. The sport of rope pulling has been practiced around the world since the 12th Century AD. Two teams of strong and steady players are placed in opposition to demonstrate their strength by hauling the other team past a specific point decided by the official. As with many other games, tug of war symbolises the struggle between two entities. Hurricane Hostilities deconstructs the rope challenge. The teams of strong players are replaced by two individuals who can only utilize the power of their lungs to conquer the event. This human gesture is regarded generally as unpleasant. Blowing towards the opponent emphasises this game’s aggravation factor. It is remarkable that such a delicate action typically provokes such shocking reactions. The use of the tube as the primary interface device for this game was selected for its ability to allow a ball to roll freely within it. By slicing it, it is possible for the players to observe their progress as the game takes place. The fast pace of this game allows it to maintain a level of interest while requiring little attention. Players gasp for air in an attempt to win the battle on the game’s large surface. The size of this game grants it importance and respect from the users. In a game of war, fragility is not an option. Infrared sensors located at selected intervals on the tube allow the game system to detect the location of the ball. This enables motors and lights to react to game behaviours accordingly.Â Source Code 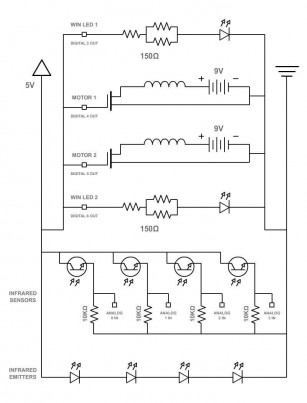